Scale and Proportion: What's the Difference?

Have you ever been disconcerted by seeing a king size bed that fills a tiny bedroom, or by a lamp shade too small for its base, or perhaps by a massive flat screen tv that overshadows the fireplace mantle next to it? If so, you were reacting to a problem with scale (the bed and the tv) or proportion (the lamp shade). The two terms are often confused, so let's sort out the differences between them.


Scale is how the overall size of one object relates to the overall size another object, or to the space in which it's placed. On the right is a painting that's much too small to fill the area above the buffet in a pleasing way. Instead of creating a harmonious composition, the painting and buffet seem unrelated, and the little painting looks like a orphan.


Choosing furnishings or accessories in the proper scale is essential to a space that works. Here are before and after examples from librariantellsall.com. The "art"  doesn't resonate with me, but the pictures do illustrate the point.

Scale Issues to Avoid When You're Selling

One of the most common mistakes I see, particularly in vacant houses, is the use of forlorn, small pieces of furniture and/or accessories here and there in a misguided attempt to make the house look furnished or "staged". Not only do they look wrong because of scale, the style often is inappropriate for the location, such as the typical flimsy aluminum outdoor chair that gets dragged in from the deck, or the accessory that's wrong for the architecture of the house. It's much better to have no furniture and accessories than it is to have the wrong ones.

Proportion is the relationship between one part of an object and another, measured in various terms, such as size, quantity or color.  An example in design is furniture. If the legs of a table aren't in the correct proportion to the top, the table could look silly. Or if the arms of a sofa are over or under-sized, the sofa is uncomfortable and unattractive. When you buy a replacement lamp shade, it has to have a pleasing shape and be in the correct proportion to the base. What other examples can you think of?

Proportion is important because each time it's used correctly, it creates a little spot of harmony. When it's misused, something looks or feels "wrong".

Some proportional relationships are more pleasing to us than others. The ancient Greeks came up with the Golden Mean, which expressed ideal proportions in a simple formula:

This 2:3 ratio is found in nature and design, including the standard dimensions (4 x 6, 8 x 12, 16 x 24, etc.) of familiar objects, such as rugs and picture frames. Did you know that we have the ancient Greeks to thank for these things?


Essential Differences Between Scale and Proportion

"The basic rules of proportion and scale are unchanging. They are reinterpreted according to the needs of the time. I like simplicity and I believe in restraint. Above all, there should be harmony-of proportion, line, color, and feeling. The most important element in decorating is the relationship between objects - in size, form, texture, color, and meaning. None of these is in good taste in itself but only in relationship to where it has been placed and what purpose it is to serve."

Keep Scale and Proportion in Mind


The next time you're considering a design project, keep scale and proportion in mind. If you need a little help, call me at 828-692-4355 to talk about what you'd like to accomplish and schedule a redesign or color consultation.
Posted by Sandy LeRoy at 12:55 PM 2 comments:

This is a story about accenting decisions for interior doors, using the white door in the center of the picture as a case in point.

When I came to this house to do a staging consultation to get it ready to go on the market, I immediately noticed many details had been accented, including the doors, windows, wall vent, railing cap, doorway arch, baseboards, etc.

The problem of seeing all those details first, instead of seeing the room as a whole, was exaggerated by the high contrast between the stark white trim and the walls. Left as is, there would be much less attractive pictures for marketing, making it a weaker competitor, especially because the house was vacant and all those details had nowhere to hide. Not only that, if prospective buyers came after all, the house wouldn't show as well in person as it could with a few simple fixes.

When I explored the room, I discovered that the center door led to a utility room, not to a living area. When the door to the adjacent powder room was closed, as it was most of the time, those doors side by side created visual confusion and focused unnecessary attention on a door that lead essentially nowhere.


To create a more attractive, harmonious, photogenic impression, I recommended painting the utility room door (and all the other undeserving details) in the wall color to make them become texture that blended, instead of things that drew the eye. Even if you're not selling, it's a solution worth considering for your doors that lead nowhere, such as those to utility or storage areas, or to closets.

Hallways are another good place to think about accenting decisions. In a long hallway with many doors, consider how much you want to call attention to them, particularly in the following situations:

Resist the temptation to create even more detail with accent colors, as in the case of the arch in the room above, or this inset panel door.


In addition to accenting with restraint, consider using paint colors with less contrast. One way to do that is to compare their LRV values (Light Reflectance Values) found at the back of most paint fan decks, and choose colors whose values are close, say no more than seven points difference.


When it comes to deciding how to paint interior doors, there's a lot to be said for accenting wisely and keeping things simple. 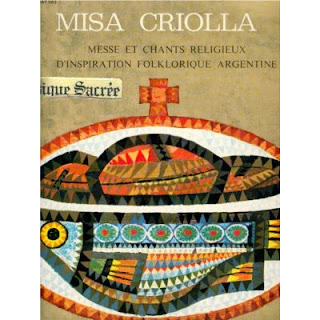 It wouldn't be Christmas without listening to certain music, and for me, one of the essentials is the glorious, joyous, "Misa Criolla" created in 1964 by the Argentine composer, Ariel Ramirez (1921-2010). I first heard it in San Francisco at the home of our friend Althea who had on cassette, and it captivated me, although it was in Spanish and I understood only a few words. To this day I haven't gotten around to translating it all because I haven't needed to. The spirit of the music is universal.

Here's what Wikipedia says about it:

"Misa Criolla was an early non-Latin Mass post-Second Vatican Council.[2][5] The Washington Post described Misa Criolla as "a stunning artistic achievement, [that] combined Spanish text with indigenous instruments and rhythms".[5] It led to album sales numbering in the millions internationally.[5] Ramírez once told The Jerusalem Post how Misa Criolla was inspired by a visit to Germany after World War II.[5] While there he had an encounter with a group of nuns, which led him to consider writing "a spiritual piece". This would eventually become the Misa Criolla.[5]

The Misa, a mass for either male or female soloists, chorus and orchestra, is based on folk genres such as chacarera, carnavalito and estilo pampeano, with Andean influences and instruments. It is also one of the first masses to be celebrated in a modern language following the lifting on their ban by the Second Vatican Council. Ramírez wrote the piece in 1963–1964 and it was recorded in 1964 by Philips Records, directed by Ramírez himself with Los Fronterizos as featured performers (Philips 820 39 LP, including Navidad Nuestra, remastered in 1994 and released by Philips as CD 526155-2). It was not publicly performed until 1967 in Düsseldorf, Germany, during a European tour which eventually brought Ariel Ramírez before Pope Paul VI. His Mass for peace and justice (1981) is quite famous.[2] Equally famous are the recordings with the solo voices of George Dalaras (1989), José Carreras (1990), and Mercedes Sosa (1999). Plácido Domingo recorded the Kyrie (the first movement of the Misa) with Dominic Miller on guitar (2003)."

YouTube has several versions, including my favorite, this heartfelt performance by Los Fronterizos (about twenty minutes):

I hope you enjoy "Misa Criolla", and that it becomes part of your holiday tradition, too. Merry Christmas, everyone!
Posted by Sandy LeRoy at 4:27 PM No comments:

The Magic Hands of Grinling Gibbons 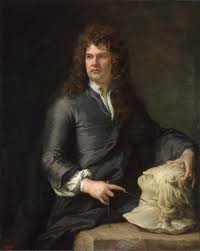 Grinling Gibbons (1648-1721) is widely recognized as the finest wood carver who worked in England. If you've visited St. Paul's Cathedral, Hampton Court Palace, Blenheim Palace and other major sites, you've likely seen and marveled at his extraordinary artistry. Faced with the need to earn a living, Gibbons also was concerned with practical matters, like payment. He was reputed to have included a closed pea pod somewhere in each project, and if he was paid his commission, he would return and carve it open.


The ethereal quality of Gibbons' works and the incredible depth and detail make it difficult to believe they could have been carved from wood. His carvings were so realistic, it was said a pot of carved flowers at his house in London would tremble from the motion of passing coaches. 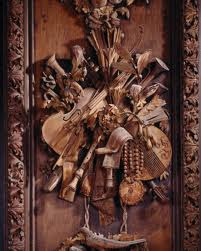 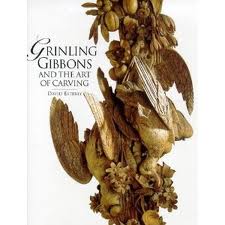 David Esterly has written an excellent book, "Grinling Gibbons and the Art of Carving", that not only is a biography, complete with numerous color photos, it also describes the techniques and tools that Gibbons used to transform limewood (in fact, two types of Tilia, commonly known as the linden tree) into a lobster, or a violin or a flower, etc.

I became a Gibbons fan after visiting Hampton Court Palace, where I also became intrigued by the elaborate iron gates forged by Jean Tijou, and began to look for more examples of their work. A few years ago I made a special trip to Petworth House in Sussex, most famous for being the subject of numerous paintings by J.M.W. Turner, to see Gibbons' famous Carved Room.

I'll always remember the awe and exhilaration of seeing so many of these grand carvings in one room, and marveling at the work of this sublimely talented artist. Surely his hands did have magical powers.
Posted by Sandy LeRoy at 1:05 PM No comments: